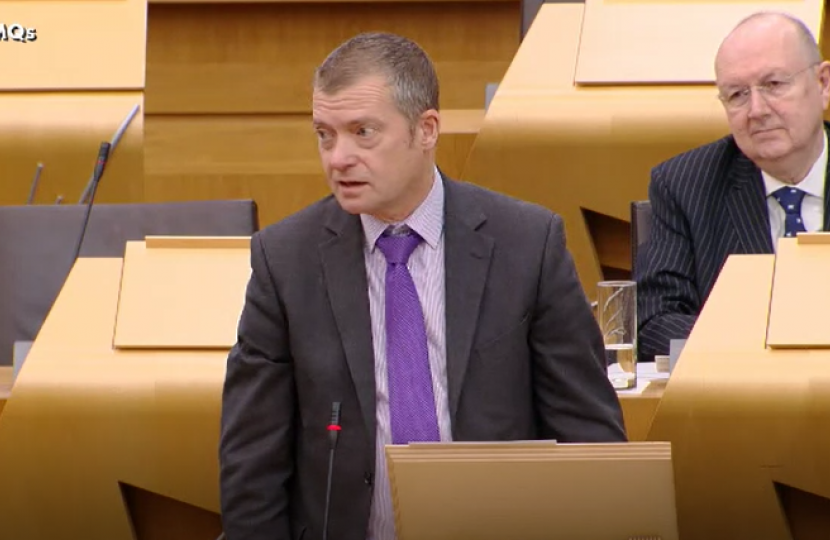 Holyrood, Edinburgh – Today at Holyrood, Graham Simpson MSP for Central Scotland hit out against the First Minister and the SNP Scottish Government for the NHS’ continued failings. During First Minister’s Questions, Mr. Simpson highlighted the plight of an East Kilbride constituent who like thousands of others continue to suffer from growing NHS wait times.

“I've had an email from a 72-year-old constituent in East Kilbride, Matthew Rodgers. He worked for 50 years as an NHS nurse, retiring at the age of 67. He has osteo arthritis in both hips and has been in pain for 15 years,” said Mr. Simpson. “He has been told he needs a new hip. He has also received a letter saying the treatment time guarantee has been missed and he has no idea when he will be treated.”

“I visited him on Sunday and asked to see any correspondence he’s had. He had to crawl upstairs and crawl back down backwards,” said Mr. Simpson. “Mr Rodgers told me: “I am at the stage where my life is totally on hold. I suffer daily. We are considering using the money we have set aside for our funerals to pay for treatment. That is difficult to bear.”

“I raised my constituent’s case with the First Minister today and she gave me the usual load of waffle which is of no use to Mr. Rodger’s,” said Mr. Simpson. “There are thousands of patients in Scotland like him who continue to be let down by this government. NHS wait times continue to get worse and people continue to suffer. The SNP Government needs to step up and follow through on its promise to reduce wait times. It’s apparent that the NHS needs to be saved from the SNP’s neglect and mismanagement.”