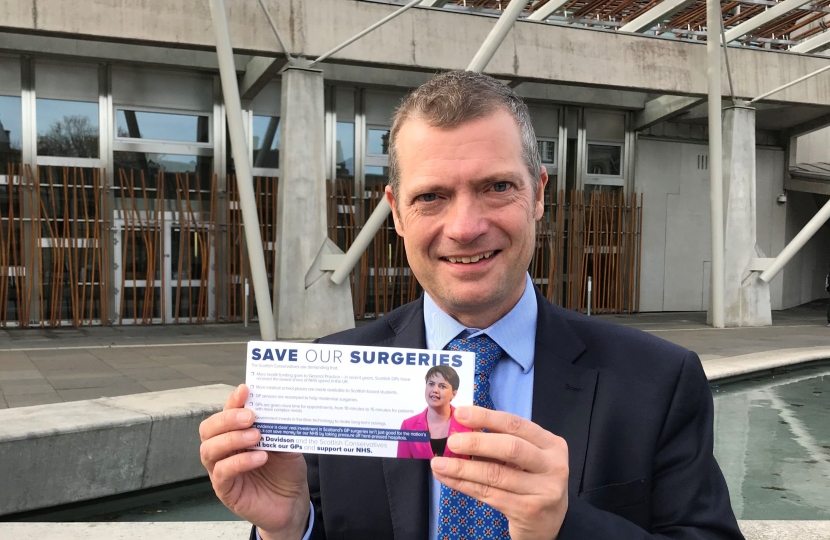 After a decade under the SNP the health service is creaking at the seams.

GPs, who are on the frontline, are leaving in their droves and practices are having to pay higher and higher sums to buy cover when a doctor is off or a vacancy is unfilled.

The Scottish Conservatives launched our 'Save Our Surgeries' campaign last week after research showed GP services and patients are being damaged by SNP Government cuts to their budget.

Family practices have seen funding slashed by upwards of nearly £200 million, according to our findings.

Now we’re seeing the damage that this has caused with Scotland having the highest number of GP training vacancies in the UK along with 3000 doctors quitting Scotland to work abroad since 2008.

The NHS has suffered badly under the SNP in the last ten years – we urgently need to boost recruitment and find ways of retaining trained doctors.

This lack of skilled GPs has created a real crisis locally across Lanarkshire, as surgery managers struggle to fill vacancies - and patients increasingly finding it difficult to get appointments.

Locums know they are in demand and so, of course, their prices goes up.

They are not at fault but if the NHS had been better-run this past decade we would not be in this position.

One locum would only see a maximum 24 patients for a day’s pay of £764 - plus the cost of a return flight from in the Isle of Man and taxi fares to the airport.

It gets worse. The Royal College of GPs in Scotland has revealed there are now 52 practices across Scotland where local doctors have handed their surgery over to the local health board because they feel unable to meet their obligations - the highest number on record.

The college estimates that by the next Holyrood election in 2021, Scotland will be short of 856 family doctors. We really are staring at a service on the brink of the abyss.

We need to reverse this shocking state of affairs. That is why the Scottish Conservatives are taking the government to task over this.

Our local family doctor IS the NHS for many of us. If we don’t act now there is a real danger that our much-loved institution will need intensive care treatment itself.