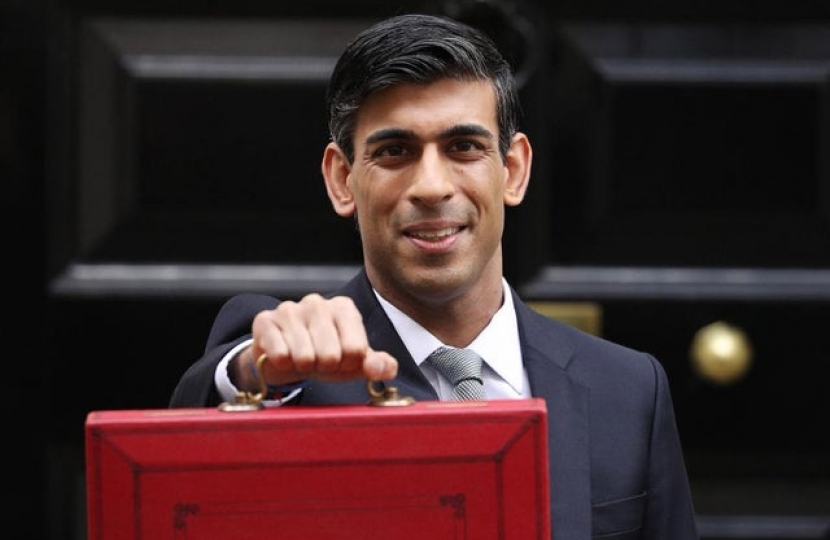 Mr. Simpson says the Chancellor’s Budget is yet further evidence of the UK Government stepping up to protect individuals, families and businesses as restrictions continue as well as helping to support the economic recovery following the pandemic.

Rishi Sunak listened to many of the calls from the Scottish Conservatives ahead of the Budget, with party leader Douglas Ross writing to the Chancellor in January. Among the measures announced by the Chancellor were an extension to the uplift in Universal Credit, as well as extending the furlough scheme and providing more support for the self-employed until the end of September.

A freeze in both fuel duty and Scotch Whisky were also announced, alongside an extension for the VAT cut for the hospitality and leisure industries to be kept at five per cent for the next six months.

The Chancellor has also accelerated growth deals for Ayrshire, Argyll and Bute and Falkirk with the funding to help create jobs and infrastructure projects now to be spent over 10 years rather than 15 years.

Over £30 million was announced to support an Aberdeen Energy Transition Zone as well as an underwater hub in Aberdeen, with a further £2 million to be invested in the North Sea transition deal.

Business in Central Scotland are also set to benefit from Rishi Sunak’s creation of a recovery loan scheme which will offer loans between £25,000 and £10 million to businesses, backed up by an 80 per cent loan from the UK Government.

Mr. Simpson has urged the SNP to deliver the extra £1.2 billion given by then UK Government to businesses and individuals as soon as possible, with restrictions continuing in the coming weeks and months.

They have also urged the SNP Government to think again over their failure not to extend the stamp duty holiday in Scotland, with Rishi Sunak giving prospective owners south of the border a further three month extension in not paying any tax on purchases worth up to £500,000.

“At every turn during the pandemic, the UK Government has stepped up to protect jobs and livelihoods in Central Scotland. The Chancellor’s Budget confirms yet again that he will be supporting everyone that needs it as we continue to fight the pandemic, and then rebuild our communities.

“With the extension of the furlough scheme and further support for the self-employed, individuals and businesses know that the UK Government is continuing to help them. And with the creation of recovery loans, the continuation of a freeze in fuel duty and on scotch whisky, Rishi Sunak has taken the specific needs of Scotland and the communities in Central Scotland directly into account.

“When you also see an extension of the uplift in Universal Credit, you can see the benefits of the Scottish Conservatives working constructively with the Chancellor.

“With a further £1.2 billion given to the SNP Government, it is now imperative on them to deliver additional funding to businesses as soon as possible. They should also look again their decision not to extend the holiday given to prospective homeowners, which Rishi Sunak has extended south of the border. We need to keep supporting our housing market as restrictions remain in place.

“All too often businesses have been an afterthought in the SNP’S response to this pandemic. Rather than them focussing on another divisive and reckless independence referendum, the SNP should be fully focussing on rebuilding our economy and communities in Central Scotland.