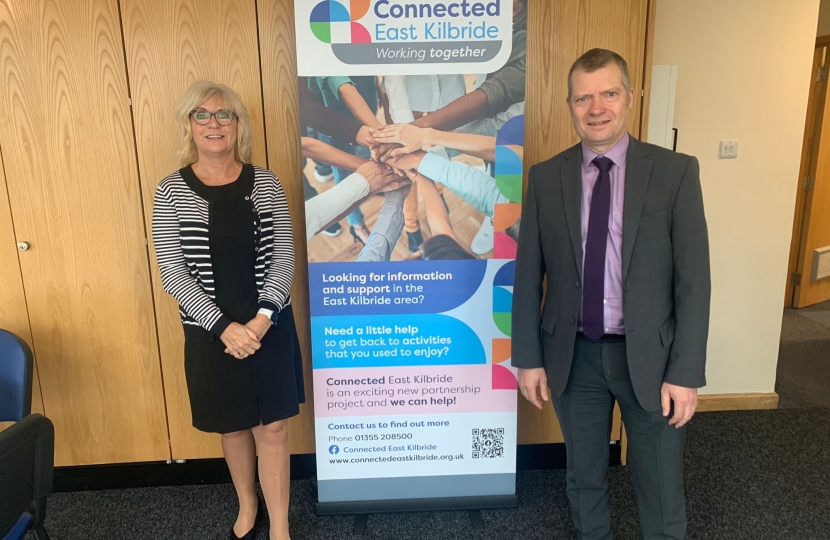 He met Project Manager and Director Lesley MacIntyre who revealed the harmful impact the pandemic has had on access to support services and its disproportional effect on certain members of the community.

The project, which was created in partnership with East Kilbride’s Citizen’s Advice Bureau, Older and Active East Kilbride and Kilbryde Hospice, has been established to connect isolated or vulnerable residents to useful groups and services.

As well as running a ‘buddy’ system for those who have barriers to coming back into the community, Connected East Kilbride have opened their hub for drop-ins between 10am and 2pm each day.

With no existing community anchor organisation in the town centre, Lesley and her team of staff and local volunteers have filled the void.

The scheme is currently operating as a pilot due to end in March but the hope is an agreement can be reached to secure it’s future for the long term.

Graham Simpson, MSP for Central Scotland said: “It's great to see these key organisations working together to help the people of the town.

“The pandemic has had a devastating effect on people's mental and physical health and it’s very often the voluntary sector that is picking up the pieces.

“I commend the work of the CAB, Kilbryde Hospice and Older and Active East Kilbride and hope people will use the new facility.

“I am sure that even more exciting developments lie ahead as they strive to create a hub in the town centre.”

The decision by the Scottish Solicitors Bar Association to boycott certain cases will be deeply concerning for victims of crime.

Solicitors have had enough and the SNP's 5% increase to the legal aid budget offers no solution.