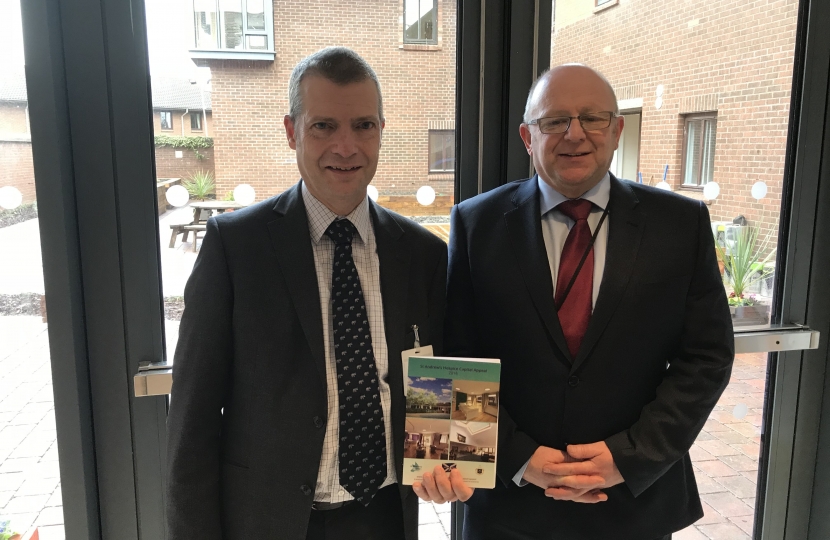 Impressive, to say the least, was how one MSP described the newly refurbished St Andrew’s Hospice after a recent tour before it opens its doors to patients again this month.

Tory Graham Simpson reckons the multimillion-pound revamp will offer great support and comfort to patients and their families alike when it reopens officially on 6th April.

The MSP was shown around the Airdrie site by Chief Executive Bruce High who explained the hospice appeal campaign has raised just under £6m of the £9m target for the Hospice Capital Appeal so far. The money has been spent on state-of-the-art medical equipment and the total refurbishment of patients rooms, which now number 21 single and 3 multi-occupancy rooms; all with full en-suite facilities.

Mr Simpson said “I have been a long-time supporter of the St Andrew’s Hospice over the years.

“I visited the hospice late last year when the refurbishment work was in full swing and it was just a building site.  Bruce invited me back recently to see what changes have taken place ahead of the reopening. I was very impressed with what Bruce and his team have achieved in such a short space of time.

"They have thought of everything, not only for the patients and families but also the hardworking staff and volunteers who help keep the hospice running. Bruce explained his team had listened to what patients wanted before the work started.  They all said they wanted brighter, larger rooms and access to the patio and garden area directly from their rooms.

“The revamp has achieved that and then some. The rooms want for nothing including fridges, TVs, personal storage space and large windows looking onto the garden. Bruce also showed me the newly installed spa bath during the tour which has been fitted with a hoist for patients who need help getting in and out of the bath.  It also includes a Sono sound system so patients can listen to their own choice of music as they relax.

“Staff will also see a big improvement in their workplace.  The nurses have new workstations at the end of each corridor to monitor patients and respond quickly to any situation that may arise.  Other staff members have not been forgotten, the designers have created a light bright canteen for staff to eat and relax in during their breaks.

“This marvellous revamp is a credit to those hard-working fundraisers and supporters who have been loyal supporters for many years. Whilst the revamp is nearing completion, the work still goes on for people like Bruce, ensuring this fantastic hospice will be serving the local community for many more years to come.”