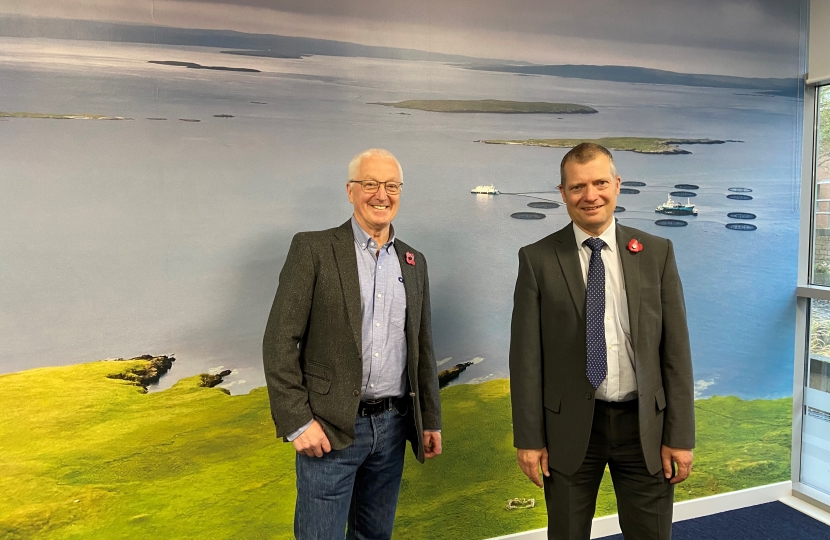 Graham Simpson, MSP for Central Scotland, spoke to Cooke Aquaculture Scotland boss Colin Blair about the importance of the aquaculture sector across Scotland.

Mr Simpson, who was one of the first people to visit the firm's new HQ in Bellshill, got a chance to hear about the firm’s operations on the islands of Orkney and Shetland and the significance of the aquaculture sector to his constituents.

Cooke Aquaculture Scotland, a family-owned company, was established in 2014 and is headquartered in Bellshill. They are the leading producer of Scottish salmon and employ 360 members of staff across the country.

The industry supports 3,600 supply chain businesses across Scotland and is worth £600+ million to the national economy. In Central Scotland 150 companies benefit – 30 of which are in Uddingston and Bellshill, 20 in East Kilbride.

As well as businesses, the aquaculture sector is also a lifeline for Scotland’s workers. The industry is a source of a variety of highly skilled and highly paid jobs. Scottish aquaculture supports 2,560 direct jobs and more than 12,000 indirectly.

Graham Simpson, MSP for Central Scotland said: “I was delighted to visit Cooke Aquaculture at their new office in Bellshill. Although, unsurprisingly, there were no fish on-site, it was great to hear about the positive social and economic impact aquaculture has in the region.

“Despite much of what companies like Cooke Aquaculture do happening in the north and west of Scotland, it is important to remember the direct and indirect impact they have on constituencies like mine.

“The Scottish aquaculture industry is a priority sector which various businesses and workers rely on. For every coastal job created by Cooke Aquaculture, another 4-5 jobs in Scotland are dependent on their sector.

“I look forward to keeping up my engagement with Cooke Aquaculture and other firms in the food and drink sector locally and I hope to visit one of their fish farms soon.”

Colin Blair, Managing Director of Cooke Aquaculture Scotland said: “We were pleased to meet Graham Simpson and welcome him as one of our very first visitors to our new corporate office in Bellshill.

“When people think of aquaculture they think of the north or west of Scotland, yet here in central Scotland there are hundreds of companies employing thousands of people that are dependent on the aquaculture sector.

“From our Bellshill office we also sell and export tens of thousands of tonnes of premium, fresh Scottish salmon to customers in more than 16 countries throughout Europe, north America and the rest of the world.

“We are grateful for the interest he showed and we look forward to welcoming him on to one of our seawater sites the next time he is in Orkney or Shetland.”