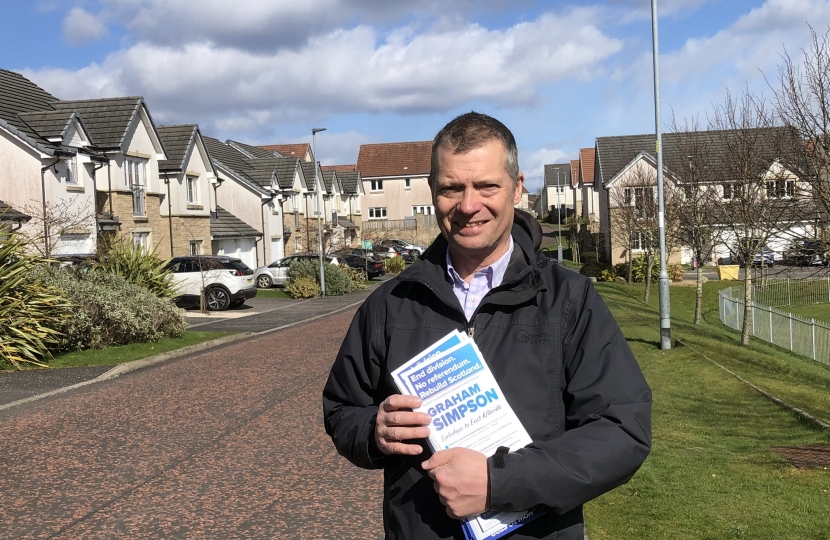 Scottish Conservative and Unionist candidate Graham Simpson for East Kilbride is pledging to guarantee 10 per cent of the health budget will be ring-fenced for mental health treatment.

Mr. Simpson has highlighted a range of proposals from party leader Douglas Ross which would ensure people in East Kilbride could access mental health support when they need it.

The plans include increasing mental health spending to 10 per cent, from the current level of eight per cent as well as expanding community mental health services such as social prescribing, cognitive therapy and peer support.

Mr. Simpson says the pandemic has only heightened the issues surrounding people’s mental health and that too many people, even prior to the pandemic, wait too long for mental health treatment in East Kilbride.

The range of measures announced by the Scottish Conservatives also include plans to boost people’s physical health. Mr. Simpson says gyms in East Kilbride should be opened instantly and local leisure facilities should also be supported in their efforts to re-open.

The Scottish Conservatives would also invest £1 million across Scotland to encourage schools to open their facilities to the public.

Commenting, Scottish Conservative and Unionist candidate Graham Simpson said: “The pressures on people’s mental health has been immense over the last year during the pandemic.

“Even before the pandemic, far too many people in East Kilbride were waiting too long for mental health treatment.

“By guaranteeing 10 per cent of the health budget will be spent on mental health, the Scottish Conservatives will ensure people can access vital support when they need it.

“We must emerge from this crisis in a healthy and active way and that is why I am also backing plans to improve people’s physical health in East Kilbride.

“Gyms can be opened safely immediately which would be a real boost to people’s mental and physical health.

“We also must see facilities being as accessible as possible to the public in East Kilbride, particularly in the evenings and weekend to offer people more opportunities to get active.

“Football is a huge part of life for so many here in East Kilbride. and bringing the World Cup to this country would be fantastic.

“Focusing on improving our mental health should be a focus of our Parliament in the coming years, rather than the SNP’s plans for another referendum.”

I am overjoyed to be returning to the Scottish Parliament alongside two new colleagues, Stephen Kerr and Meghan Gallacher.

I want to thank everyone who made this possible and for those who voted for me in East Kilbride. I will not let you down.