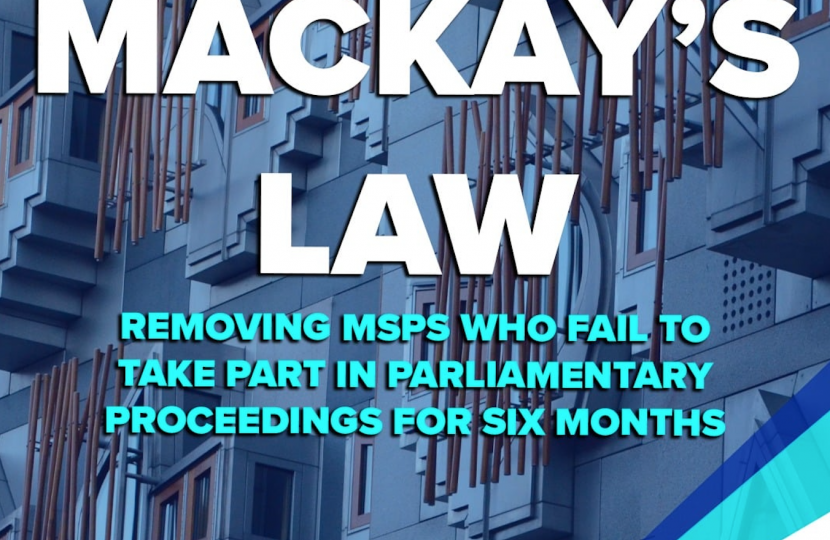 The SNP’s supposed investigation into Derek Mackay went on for over a year and now appears to have been quietly dropped, just before the election.

Nicola Sturgeon and her boys' club are up to their neck in sleaze and always seem to do the wrong thing by those who make sexual complaints against their politicians. Just this week we heard worrying evidence of SNP MPs accused of sexual misconduct being 'protected' by the party.

Mackay was very close to the Sturgeon-Murrell household and was allowed to keep raking in taxpayers' money for over a year while not turning up at Holyrood once. This is why the SNP Government must back my Mackay’s Law proposal.

Councillors who don't attend for six months are kicked out - yet no such rule applies to MSPs. If they don’t do the job they've been elected to do, the taxpayer money tap should be turned off."

In February 2020 it was reported that SNP finance secretary, Derek Mackay bombarded a 16-year-old boy with 270 messages including calling him “cute” and inviting him to dinner. (The Scottish Sun, LINK)

He has not been seen at Holyrood since then but continued to claim his salary and over £11,000 in expenses.

It was reported last night that he has resigned from the SNP this week, who say the matter is now "closed". (The Scottish Sun, [http://He was not seen again at Holyrood but continued to claim his salary and over £11,000 in expenses.]LINK)

Scottish Conservative MSP Graham Simpson MSP is calling for "Mackay’s Law.” which would give parliament power to kick out MSPs who didn't attend for six months, as already happens with councillors. (The Herald, LINK)