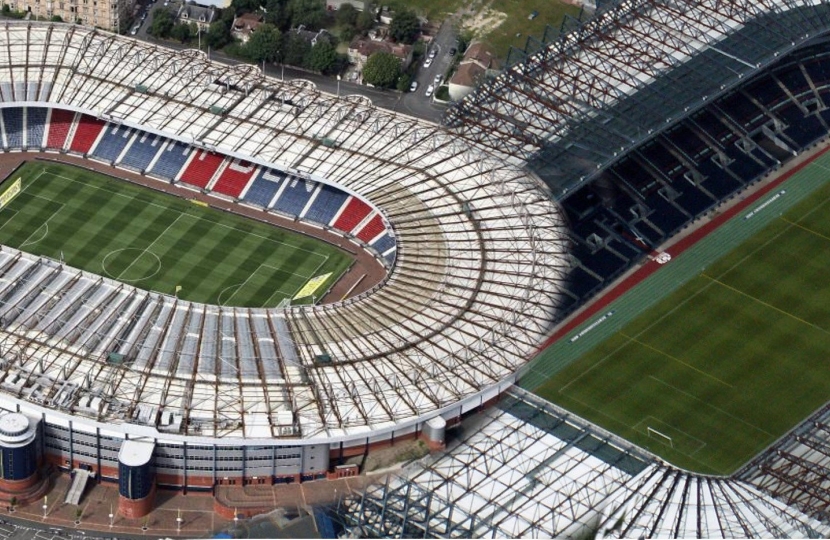 James Dornan debates always force me to talk football it seems, so here we go again.  The SFA has a decision to make about where the national stadium will be after 2020.  As a keen football fan and a supporter of the newly crowned SPFL champions, I have fond memories of Hampden and its famous “Roar”.  But I am talking about the Hampden that gave birth to the wall of noise before it was tamed by the refurbishment of the stadium back in the 1990’s.

As I was sitting down to write this speech, I took time to reflect on some of my own memorable moments of high-drama in Mount Florida over the years. My first visit was as an 11-year-old when I was taken to the 1975 Cup Final between Celtic and Airdrieonians in Billy McNeill's last game. Not only was there a sense of history but the atmosphere – to me anyway as a boy – was incredible.

Ten years after that I was present at the Scotland-England match, which Scotland won 1-0.  I haven’t in general got a great memory for goals or goalscorers but I remember well Richard Gough soaring majestically to head past a static Peter Shilton. Hampden did indeed roar. I watched highlights of that game at the weekend and the noise, even through my PC, was extraordinary.  We were in the stand for that one – my dad wasn't one for the terracing but once I had moved to Glasgow as an adult I would usually opt for the standing option – even it meant getting soaked some times.

Walking down Aitkenhead Road on match day back then, you felt the hairs on the back of your neck stand up with the noise rolling down off of the old terracing in anticipation of the duel ahead. Sadly, times have changed and not for the better. The new stadium is soulless. Fans are miles away from the action. The wall of noise is gone. If you are at the back then you’d be better off at home watching the match on the telly.

Sure, it has had its moments. Who can forget the Zinedine Zidane goal in the 2002 Champions League final or more recently, Leigh Griffiths’ stunning free-kicks against England last summer.  And, of course, there was the moment when I took to the pitch in a five-a-side competition, sharing it with one of my football heroes Danny McGrain.  I don’t though get excited very often about going to see games at Hampden.

The SFA has a tough decision to make and it looks as though it is down to two choices - Hampden or Murrayfield.  I am not a rugby fan, so had never been to Murrayfield until Celtic played a couple of European games there in 2014 as their own super-impressive stadium was being used for the Commonwealth Games. I have to say I was impressed and came away thinking ‘this should be the national stadium’.  It has recently hosted Hearts, of course, while Tynecastle was being rebuilt and did its case no harm.

If you can put aside any anti-rugby bias then having the national stadium in the capital surely makes sense. The decision must be based on what is right and not on sentiment.  It’s time to be bold. The Hampden Roar is a distant memory. It’s not there to be saved.

The SFA must give football a stadium where we can genuinely strike fear into the hearts of the opposition and Hampden isn’t it.

You can watch the video of my speech HERE.