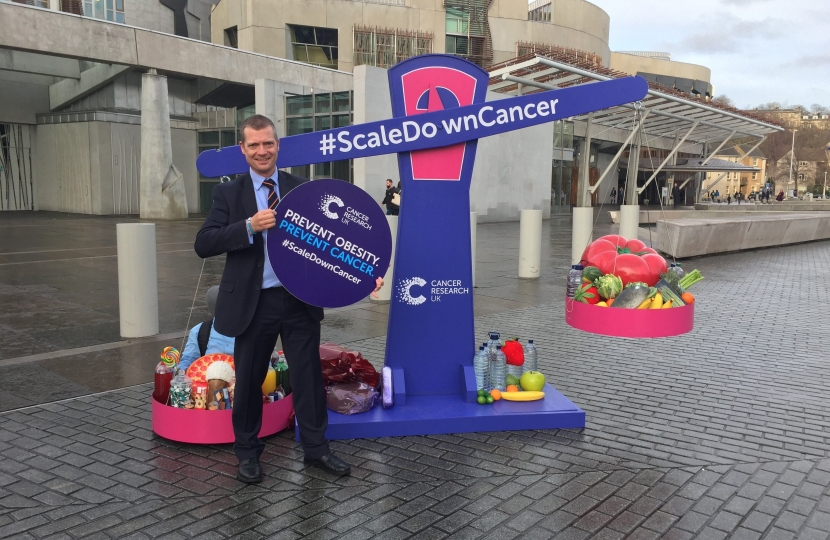 SUPPORTS CALL TO SCALE DOWN CANCER

To highlight the growing obesity epidemic, Cancer Research UK unveiled a giant set of scales outside the Scottish Parliament, weighed down by a mannequin of an obese child in an XL-sized school uniform.

Scotland has one of the heaviest populations in Europe, with two in three adults in Scotland overweight or obese.*

Given that obesity is the single biggest preventable cause of cancer after smoking, the Cancer Research UK campaign asks politicians to support a call to ensure cancer is scaled down to size in Scotland.

A new survey** commissioned by Cancer Research UK’s Scale Down Cancer campaign reveals that seven out of ten Scots support a ban on supermarket multi-buy promotions of junk food.

Six in ten people in Scotland say they buy unhealthy food on promotion at least every week according to a second poll** for the charity – and eight in ten Scots agree the country has a problem with obesity.

Now Cancer Research UK is urging the Scottish Government to do more to tackle obesity and prevent cancer by restricting supermarket multi-buy discounts that are high in fat, salt and sugar.

Foods on promotion account for around 40 per cent of all expenditure on food and drinks consumed at home, and Cancer Research UK warn this unhealthy shopping habit is weighing heavily on the health of the nation.

Gregor McNie, Senior Public Affairs Manager at Cancer Research UK, said: “Levels of people who are overweight or obese in Scotland are the worst in the UK and our shopping habits are at the heart of the problem.

“We know that sugary drinks and snacks are more likely to be discounted than healthier foods. Our survey shows people are being attracted by these promotions, something which is setting them up for a lifetime of ill-health.

“We need urgent action now to prevent thousands of cancers in the future.”

Graham Simpson MSP said: “Four in ten cancers are preventable, yet not enough of us know that obesity is the single biggest preventable cause of cancer after smoking. Given the devastating impact that cancer has on families in Central Scotland, it’s vital we take action on obesity.

“We mustn’t let obesity continue to be the new normal in Scotland, and that’s why I’m joining forces with Cancer Research UK and the Scale Down Cancer campaign.”