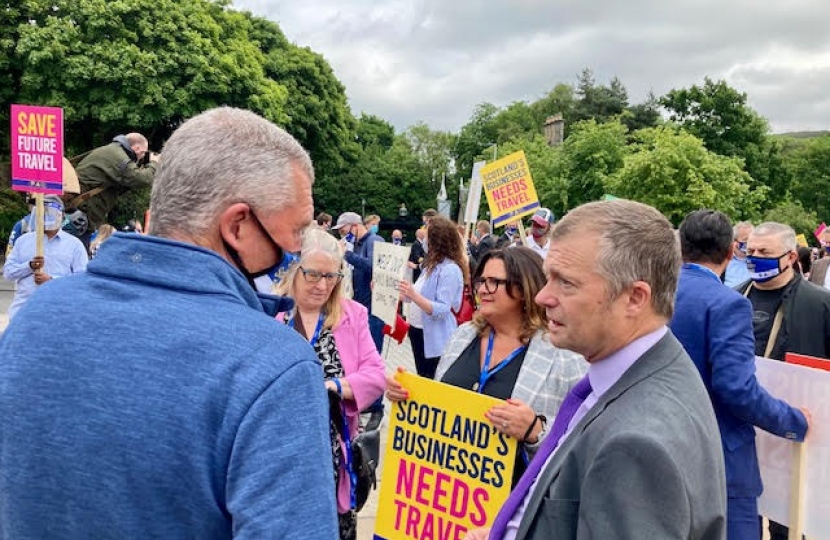 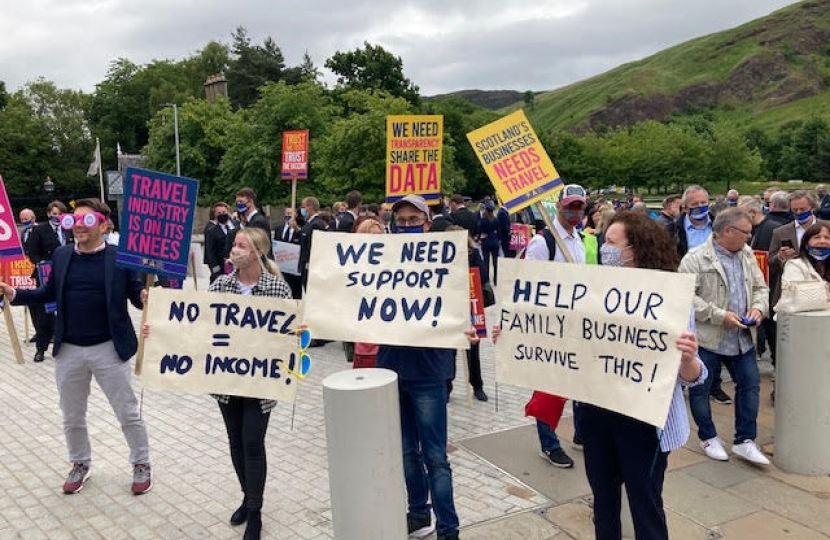 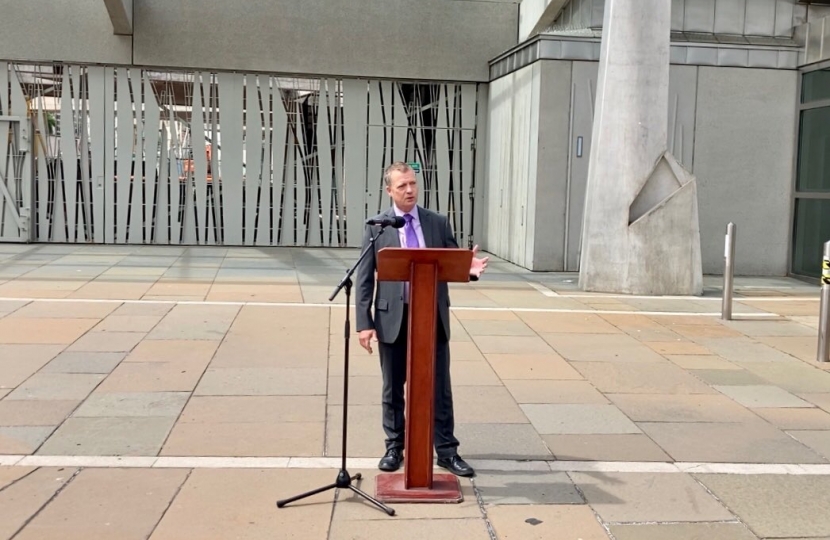 Graham Simpson, MSP for Central Scotland and Shadow Minister for Transport joined hundreds of pilots, cabin crew and travel agents at Scottish Parliament on Wednesday June 24 to mark the SNP Scottish Government’s failure to restart travel. Mr. Simpson spoke to the crowd and urged the SNP Scottish Government to respond to the SPAA and their Members with ongoing support for travel providers, airports and airlines.

The Scottish Passenger Agents’ Association and its Motherwell-based president Joanne Dooey argued at the event on Wednesday that there are no major tourist destinations on the quarantine-free green list, and the SNP Scottish Government has urged people to avoid holidays to countries on the amber list, leaving the industry on its knees.

According to the SPAA, more than 26,000 people across Scotland are either employed directly by travel businesses operating within, or have jobs reliant upon, the outbound travel sector, and in normal times, outbound travel is worth just over £1.5bn to the Scottish economy every year. 8,770 jobs have already been lost or placed at risk across the Scottish travel sector and its supply chain since the crisis started. This figure represents almost a third - 31% - of all jobs in the industry.

To highlight the seriousness of the situation facing many travel businesses in Scotland, the SPAA has written to the First Minister, reiterating the urgent need for a plan to save jobs in the industry and calling for grant funding to be made available to travel businesses.

It has also raised its concerns about the repeated statements made by the Scottish Government on social media and in briefings about not travelling overseas “unless it’s essential” and the damage that does to consumer confidence and businesses and that, if such advice is given, support should be provided to those businesses affected.

Graham Simpson, MSP for Central Scotland said: “What a nonsense this industry has had to go through. We see Scotland fans are allowed to go to football matches in great numbers which I have no problem with but we’re not allowed to attend things like nursery celebrations or even dare I say it, travel to Manchester to see some friends.

“I was on a call earlier last week with members of the travel industry and I could sense the anger that’s out there in the industry which I described when I was questioning John Swinney about the Manchester ban and the hollowed out travel sector.

“Joanne Dooey, president of the SPAA is based in my region and I’ve spent some time in her Motherwell shop. There was only one customer when I was in and they were there for advice. This industry has become an advice sector, not a travel sector.

“Sometime soon, the Scottish Government is going to have to wake up to the fact that there are thousands of jobs on the line here. If help is not forthcoming soon, I fear those jobs could go and people will simply not be able to go on holiday because no one will be there to help them.

“I’m listening and my party is listening but we need the SNP Scottish Government to sit up and take notice.

Joanne Dooey, president of the SPAA in her open letter to the First Minister said: “Since March 2020, Scotland’s award winning travel agents have had nothing to sell and no one to sell to. They’ve had to remain open to service repatriations and rebookings, but they’ve been overlooked as retail operations and left with little sector specific funding support.

“What modest support they’ve been given – which depended solely on their rateable value of their premises and omitted the army of home workers upon which the wheels of the travel industry turn – has gone. It was spent on shoring up their businesses and staff as the sands shifted ever more from under their feet.

And all of this after they had used up all their working capital, spent their life savings and taken bounce back loans they are now unable to repay.

“The irony of the furlough scheme – which ought to have been a lifeline for their finances – is that despite having nothing to sell, agents had to remain open to handle the many thousands of customer bookings which have been futile.

“As passenger numbers have plummeted to their lowest levels for decades, our whole Scottish airport infrastructure is in peril.

“Travel agents need financial support to be commensurate with restrictions.  The government is duty bound to support businesses which cannot trade due to restrictions – travel agencies may remain technically open – but with nothing to sell and no one to sell to.

“On the other hand, level 2 support has been granted to other businesses which are able to trade in a reduced capacity such as hospitality businesses and taxi drivers.

“They want to travel for education, culture, new experiences and just because we’re Scottish and we’re intrepid travellers.