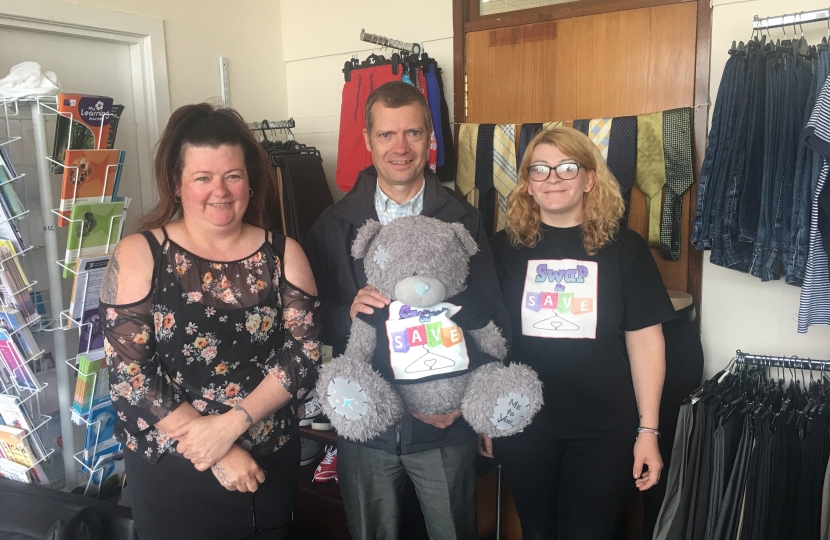 Graham Simpson MSP congratulates Swap and Save for the valuable work that they do and for the funding they have received from the Bags of Help initiative.

Mr Simpson met with Angelina Keating who set up  Swap and Save four years ago after fleeing a violent partner.  All the volunteers who work within the organisation have fled some form of trauma.

The meeting originated through Tesco Bags of Help who funded £2,000 for the charity.  This money is earmarked for a ‘group room’ that will be used as a gathering place for women, and they can learn new skills such as sewing.

The MSP said “Talking with Angelina has provided me with the opportunity to see first-hand the valuable work that this organisation carries out for vulnerable women. It provides an essential safe place for women to come together.

“Since moving into East Kilbride the charity has gained lots of support and helped many women.  They have gone from opening twice per week to opening on a 3rd day each week.

“Most of the man’s clothing goes directly to the homeless and they work closely with several homeless charities. Angeline provides peer support and tried to build confidence in the women who use her service.

“The charity is run entirely through volunteers who have themselves suffered terrible trauma.  This project highlights the great benefits that local community groups can bring if provided with funding and support.

“Since registering as a charity Angeline has had to deal with a substantial amount of red tape and she has had to learn quickly about how to run an organisation.  I hope that she finds the administrative support that she requires with the running of the organisation.

“I would also like to thank Tesco for their funding which has helped the charity earmark money for a ‘group room’ that will be used as a gathering place for women, where they can learn new skills.  I wish everyone at Swap and Save all the very best in the future, and I hope to be invited back to see how they are progressing.