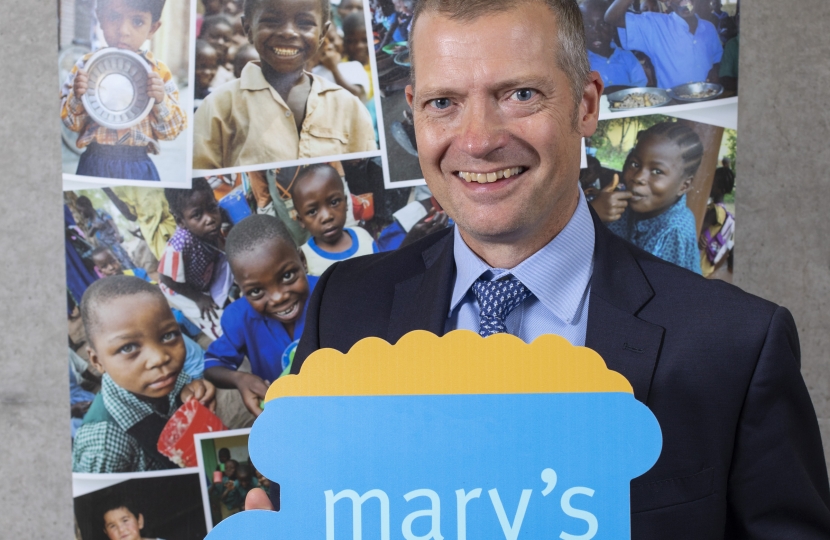 The charity, which feeds more than 1.5 million children around the world every school day, is also asking constituents in Central Scotland to share their #PorridgeSmiles to help raise awareness of its life-changing work.

Graham Simpson, MSP for Central Scotland said: “Mary’s Meals is a wonderful charity, founded here in Scotland, that feeds more than 1.5 million children around the world every school day. I am proud to be supporting its life-changing work with my Porridge Smile.”

Karen Gray, UK Director of Communications and Fundraising at Mary’s Meals, said: “We celebrate World Porridge Day because it is a mug of vitamin enriched maize porridge that Mary’s Meals serves to thousands of children every school day in countries including Malawi, Zambia and Liberia.

“I hope that people in Central Scotland will share their #PorridgeSmiles today too and help us to reach even more hungry children around the world.”

Mary’s Meals sets up school feeding programmes in some of the world’s poorest countries. The food attracts children into the classroom, where they receive an education that can, in the future, be their ladder out of poverty.

Martha, eight, from Malawi receives porridge from Mary’s Meals in school each day, and loves playing netball with her friends. She said: “School is important because it teaches me how to read. Porridge helps me concentrate. I’m able to pass my exams because I’m not hungry in class”.

Mary’s Meals supporters across the UK are marking World Porridge Day by sharing their #PorridgeSmiles on social media and throwing Porridge Parties to raise funds for the charity. Mary’s Meals has also published a collection of porridge recipes from celebrities and chefs on its website – with Joanna Lumley, Tom Kitchin and Melissa Hemsley all taking part.

To share your #PorridgeSmiles simply post a photo of yourself on 10 October smiling with your porridge bowl on social media using #PorridgeSmiles and tagging @marysmeals.