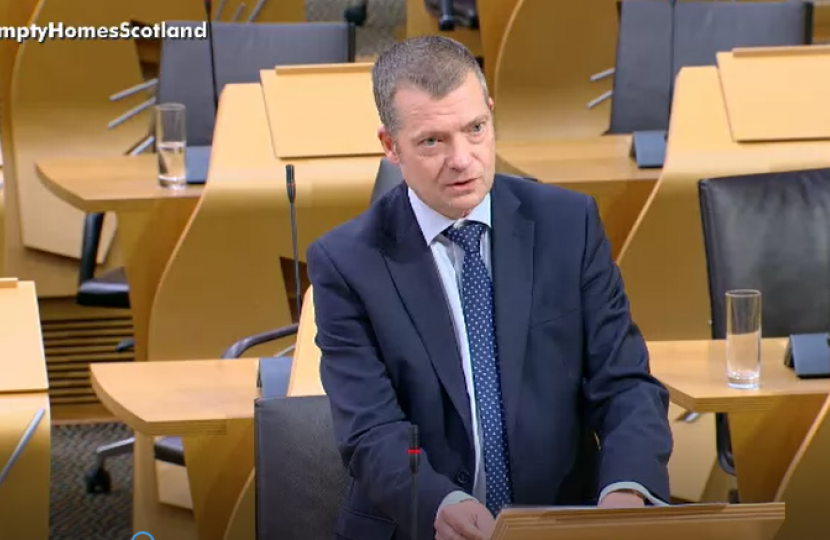 Tory MSP for Central Scotland, Graham Simpson kicked off the New Year by calling out the SNP on the state of empty homes during parliamentary debate today. Mr. Simpson highlighted the cost savings found by utilizing Scotland’s existing, unoccupied housing stock as an answer to the growing housing crisis and implored the SNP to follow through on their housing policy commitments.

“We are making very little impact on the number of properties that are not in use,” said MSP Graham Simpson. “At a time when we have a homelessness crisis and young people struggling to get their foot on the housing ladder, the SNP Scottish Government simply are not doing enough. An opportunity is being missed with empty homes in Scotland as it makes far more economic sense to utilize an existing property than to build a new home.”

“When you look at the difference in cost between building a new home and renovating an existing property, the relative cost savings are quite clear,” said Mr. Simpson. “Transforming a vacant property into a proper home would add so much to a neighbourhood and the broader community.”

As Shadow Housing Minister, Mr. Simpson also called on the SNP to enact Parliament’s Local Government and Communities Committee report recommendation for the Government to fulfil its manifesto commitment and introduce compulsory sales orders to tackle the issue.

“Minister for Local Government, Housing and Planning Kevin Stewart’s response to the recommendation on compulsory sales orders was disappointing to say the least as he never provided us with a concrete timeline,” said Mr. Simpson. “This government is just dragging their feet on enacting proper empty homes policy. While the issue is complex and it requires different solutions, the SNP need to heed the advice of the parliamentary committee and start turning vacant houses into homes.”