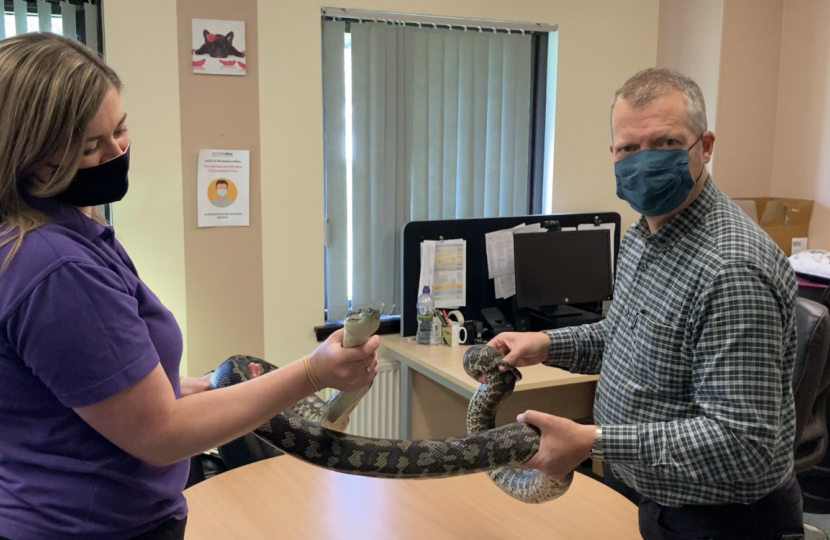 The amazing staff at the Scottish SPCA Bothwell centre introduced Graham Simpson, MSP for Central Scotland to a number of animals in their care whilst providing him with a behind the scenes tour.

Mr. Simpson's visit also brought home the importance of the Animals and Wildlife (Penalties, Protections and Powers) (Scotland) Act 2020. The new Act outlines changes including increased maximum penalties for the most serious animal welfare offences to five years’ imprisonment and/or an unlimited fine.

A part of the Act yet to be introduced is around animals that have been taken into possession on welfare grounds to be rehomed without the need for a civil court order. This year, the Scottish SPCA have provided temporary refuge for 2,039 animals. This includes over 850 dogs and 600 cats. On average these dogs spend 84 days in their care and cats spend 93 days. Since 2016, the financial impact of caring for the animals caught up in court cases, or other temporary refuge situation, has amounted to £3.7m.

Additionally during his visit, Mr. Simpson learned that in 2020, the Scottish SPCA's centre in Lanarkshire rehomed 643 animals and cared for 319 animals involved in legal proceedings. 78 stray animals were returned to their owners out of Lanarkshire.

If people were looking to support the Scottish SPCA's amazing work, their Lanarkshire centre needs some items for the animals in their care. They'd be grateful for anything anyone can spare.

Items can also be sent from any other online retailer that can deliver or left in the donation bins at the centre at Bothwell Road, Hamilton, ML3 0SB.

Graham Simpson, MSP for Central Scotland said: “I was delighted to have the opportunity to see first-hand the important work carried out by the Scottish SPCA.

"It was a pleasure to be invited to the local Scottish SPCA rehoming centre here in Bothwell. It was a very informative visit and the team are doing a great job working to protect and find animals new homes in the Lanarkshire area.

“Winnie the seven-foot carpet python was particularly interesting to meet. She's been at the centre since 2018 and they're looking for the right person to give her the home and care she deserves.

“The Scottish SPCA has a lot of great and exciting projects, and it is great to be able to support the organisation. Their key message is for people not to buy puppies from poor-quality puppy dealers.

“During COVID especially, so many families have wanted a new four-legged friend but the puppy trade is a multimillion-pound industry which puts profit ahead of animal welfare. The Scottish SPCA are dedicated to put an end to the illegal trade.

"I am also keen to see legislation go through that would allow animals to be rehomed quickly.

Scottish SPCA chief superintendent, Mike Flynn, said: “We were delighted to welcome Graham Simpson MSP to our centre in Bothwell. It was a pleasure to update Mr. Simpson on our future plans and to hear of his passion for animal welfare.

“Our team gave Mr. Simpson a tour of the centre and showed him our vivariums where he saw many of our snakes which he took particular interest in.

“We showed Mr. Simpson our sensory garden which was created to provide stimulation and experiences for dogs who are not used to life outside a kennelled environment, such as those from the low-welfare puppy trade.

“The exponential rise in the puppy industry over lockdown has doubled our efforts to tackle the trade and has led to more seizures of dogs and puppies who are unable to be rehomed before any legal proceedings are concluded. This has meant our centres have hit capacity which has a detrimental effect on our resources and finances.

“Upcoming changes to legislation will allow us to rehome temporary refuge animals’ sooner. This will be of massive benefit to the animals we care for. It’s fantastic to have Mr. Simpson’s support on this.”