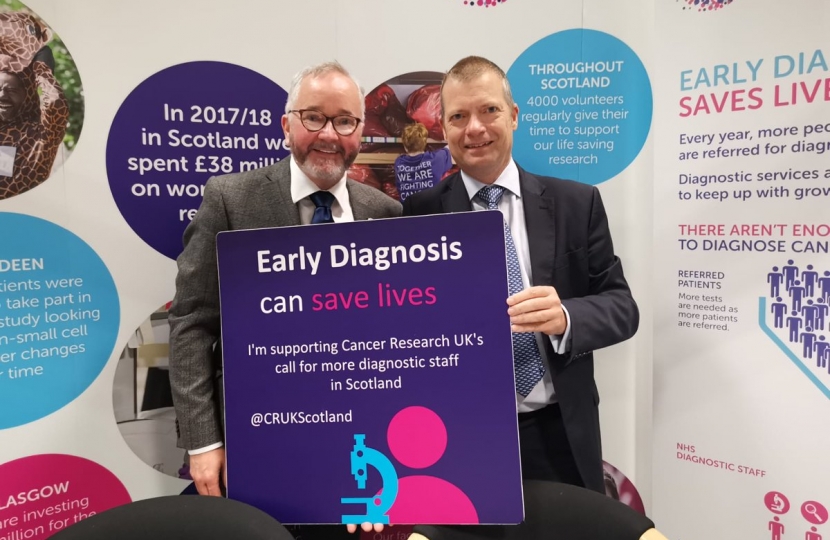 Graham heard about Cancer Research UK’s latest campaign, which urges the Scottish Government to address shortages in the key members of the NHS workforce in Scotland who diagnose cancer.

The earlier a cancer is diagnosed the more likely it is to be treated successfully. For some of the most common types of cancer, survival is more than three times likely higher when the disease is diagnosed at its earliest stages.

The national target for diagnostic testing states that that no one should wait longer than six weeks. Despite this, statistics show that only 78.1% of patients received the test they needed within the six week target period, resulting in over 18,000 people waiting too long.

Graham Simpson said: “Like everywhere in Scotland, cancer has a huge effect on families in Central Region, so it was very interesting to meet with the Cancer Research UK team to hear more about their priorities for diagnosing patients sooner in Scotland.”

Gordon Matheson, Public Affairs Manager in Scotland at Cancer Research UK, said: “the NHS is under continued strain with too many patients still waiting too long for tests, some of which could detect cancer.

“With a welcome focus on screening and early detection of cancer, there’s an urgent need to comprehensively address workforce shortages. Much needed investment in this area is beginning to emerge and it’s vital we see a strong emphasis on making sure we have enough staff to meet increasing patient need, and that existing staff are being used to their best potential.”

Homebuyers left in limbo are desperate for construction sites to reopen

For many anxiously waiting, the work to be completed on their new homes is extremely minor.