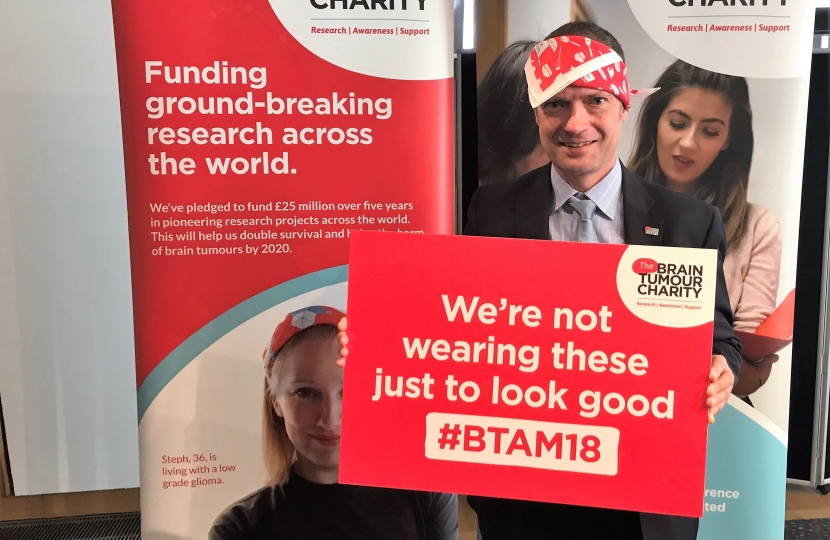 Brain tumours are the biggest cancer killer of children and of adults under 40 in the UK and reduce life expectancy by 20 years on average.

The impact of a brain tumour diagnosis on quality of life can also be severe, with common side effects including cognitive difficulties, personality changes and fatigue.

To help raise awareness of the disease, over 30 MSPs across all political parties united in the Scottish Parliament last month at an event hosted by The Brain Tumour Charity to raise the awareness of the charity’s work.

After the event, Mr Simpson said “It was a pleasure to attend the event hosted by The Brain Tumour Charity, to help raise awareness of this devastating cancer.  It is important that MSPs from all political parties endorse the work being done to support people with brain tumours, pushing for earlier diagnosis and increased research to improve survival rates. I’ll be doing everything I can to ensure that people diagnosed with this condition in Lanarkshire get the support they need”.

The Charity has recently launched a new report on the financial impact of a brain tumour titled The Price You Pay. The report describes how 80% of brain tumour patients have their working life affected after diagnosis, and provides recommendations on how the benefits system can be improved.

Cameron Miller, the Charity’s Head of Policy & Public Affairs said “The report is evidenced by survey responses from people that have been directly affected by a brain tumour. Unfortunately, the report displays the harsh reality that many patients and carers face, including reductions in household incomes, and inadequate support and information.  We thank all MSPs who attended our event and we hope to work with them to tackle this devastating disease”