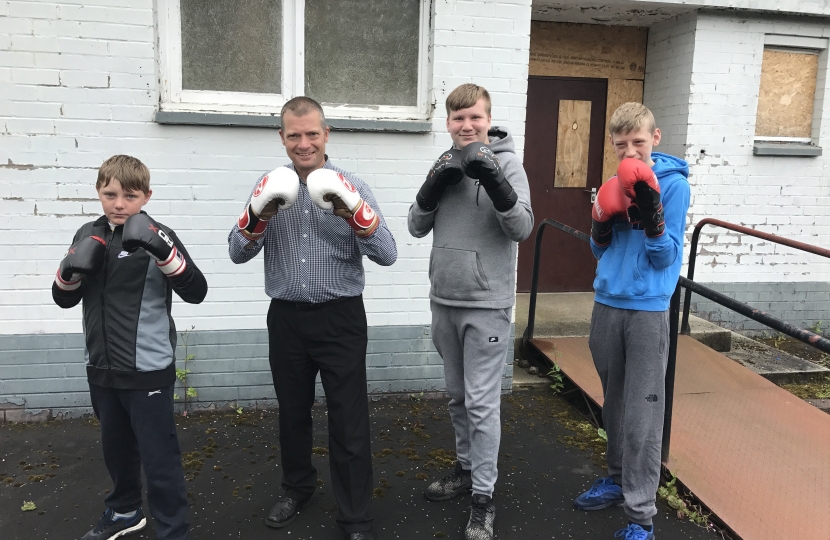 I'm backing plans to turn a disused hall into a boxing club.

I recently visited the boarded up Coltness Community Hall building which has lain neglected for seven years to meet the people behind the ambitious plan.

After hearing their plans I  believe that the project is ideal for a community asset transfer and has pledged to help campaigners achieve that.

Kenny explained one of his main goals is having the boxing club play its part in helping to eradicate anti-social behaviour by offering youngsters a place to get fit and have fun at the same time.

It was great to get down and meet Kenny and hear what he has planned for the old community hall.

We spoke at length about the club and how they could go about securing the hall not only as a boxing club but also an exercise club as well.

They have certainly got the backing of the local residents, with over 1000 people signing up to support the boxing club.

Not only that but local tradesmen have offered to give their time free of charge to help. That’s real community spirit in action.

This project is just what the new community asset transfer rules were designed for and it's now up to North Lanarkshire Council to ensure the building - which they have no use for - is handed over.

I will be working to make sure that happens and that the people of Coltness get a facility that they can be proud of.

John also told me that anti-social behaviour is on the rise and he aims to encourage youngsters to come and see for themselves what the club can offer in the hope it will reduce vandalism around the area.

Kenny backed up John saying that if he didn’t have access to a boxing club when he was younger he believes he would have gone down a different path altogether and wants to give the same opportunities to the youth of Coltness that he got through his boxing career.

It now all about making it happen. They have had a few discussions with North Lanarkshire Council officials and explained their frustration of the length of time it has taken to get things moving.

I will be contacting the council to see where things stand at the moment. This is a fantastic idea and the local community have certainly got behind Kenny’s plans as have I.

I would love to return to see the club once it is fully up and running.